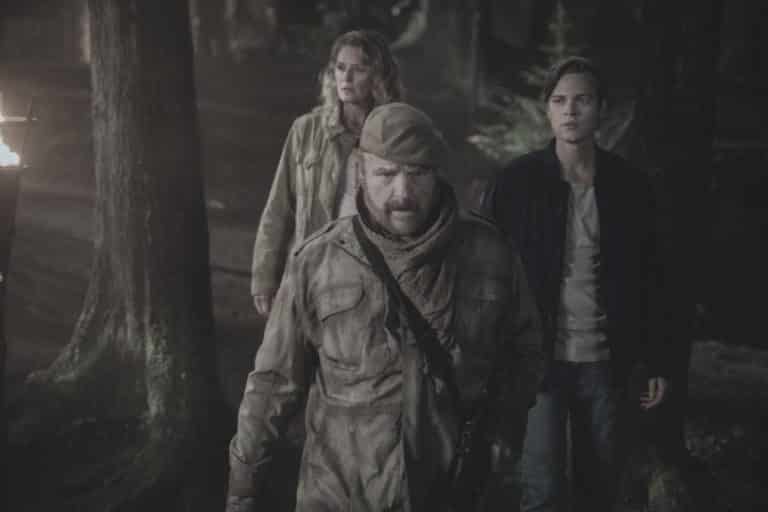 Sam: Don’t you think you should, uh, take it a little easy on the nitrates?
Dean: Dude, if bacon’s what kills me, then I win.

Jack: You said he was in your head? Well, he’s in my head, too. And I saw everything. He’s gonna bring an army to our world and just He wants me to open the door. But I won’t. He can’t make me. I-I don’t care how much he hurts me.
Mary: He’s not gonna hurt you, Jack. He’s gonna hurt me. Why do you think he brought you here? So that we would meet, so we would talk. And then when he comes back, if you don’t do what he wants, he’s going to kill me.

Dean: Okay, Jack brought you back because we needed you back.
Castiel: Right. And how have I repaid him? I promised his mother that I would protect him, but now he’s trapped in that place while Lucifer is here, who’s I mean, he’s getting stronger and more powerful by the day. And if Michael really is coming, maybe I was brought back to help prepare.
Dean: Prepare for what?
Castiel: War. War is what Michael does.
Dean: Well, then we do what we do. Whatever it takes.

Gog: Which shall we kill first?
Magog: I will kill the pretty one.
Dean: It’s like a furry diaper.
Castiel: Dean.
Gog: They are equally pretty.
Magog: The small one then. Enough you. Embrace your beautiful death!

Mary: You called me Mary Campbell. Do you know me?
Bobby: Well, knew you, the other you. She Well, hell, I thought you were a damn ghost. Turns out you’re just from a whole other world, which is weirder when you think about it.

Sam: Was it the tablet that — that did this to you or…
Donatello: It didn’t do anything to me. I translated the tablet. All of it! I saw the power of God! And it’s all up here. And you wanna take it from me.

Bobby: I don’t mean to stare. Just You you look just like her. Give or take a year or two.
Mary: What was she like?
Bobby: Mary Campbell was a complicated woman. Brave, but sad. Full of regret.
Mary: Let me guess — she made a bad demon deal?
Bobby: Opposite. She didn’t make one. Lost the love of her life. Never moved on.
Mary: And Dean and Sam were never born. Bobby, I made that deal. And it — I brought my boys a lot of pain. But What happened here, in your world? Sam and Dean stopped that war in mine.
Bobby: Then I’d say you made the right choice.

Bobby: Look, Mary, when this all started, when Lucifer and his demon army rose out of hell, we thought the angels were on our side. But one by one, they turned on us. He will, too. It’s just a matter of time.

Jack: I had to come back. Sam and Dean, they wouldn’t run. They’d stay and fight. These angels, what they’re doing, they’re not gonna stop. As long as Michael’s out there, this war will never be over.
Bobby: So what are you saying?
Jack: I have to kill him.

Castiel: Some people just can’t be saved.
Dean: Yeah, but who gets to make that choice? You? What exactly gives you the right?
Castiel: Nothing. I took it. If I hadn’t acted we would still be sitting around talking about what to do next, we would be wasting time. And it’s time we don’t have Dean. I told you, war is coming. War. And I did what soldiers do. Now we needed the spell to open the rift, and I got it. We need four major ingredients: The grace of an archangel. A fruit from a tree of life. The Seal of Solomon and the blood of a most holy man. We find those things, we can bring everybody home. And together we can beat Lucifer and Michael. this is the only way we win. This is the only way we survive. It’s like you said Dean. Whatever it takes.