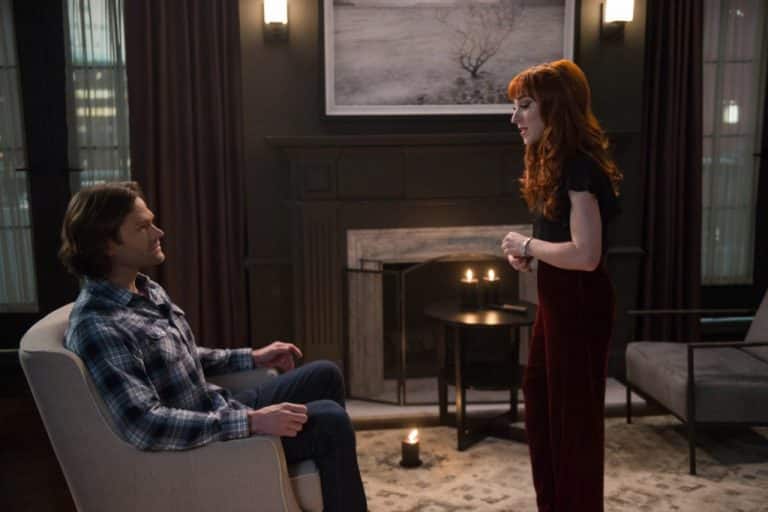 Dean: A rich lady exploded?
Sam: Yeah. Local cops are — are calling it spontaneous combustion, but… pretty much.

Castiel: Dumah. I need to talk to you. I know you want to murder me, and I know that you have good reason to want to murder me. But there are events unfolding on Earth, and, um… well… the archangel Gabriel, he’s alive. And I need to find him before Michael, who’s… It’s not our Michael. It’s another much, much worse Michael. I need to find him before that Michael invades this world to… to either subjugate or destroy it. Or both, probably in that order. And there’s also the problem of… of a missing Nephilim and Lucifer. He’s back, too. It’s… it’s been an eventful few weeks. I realize that this may be a long shot, but…

Jessica: I’m especially fond of Sam’s impressive… extensive array of hair products. Not to mention, the 3-day-old bacon cheeseburger in your room, or the VHS tape hidden under your bed, labeled, ‘Sweet Princess Asuka Meets the Tentacles of Ple–‘
Dean: Okay, all right, all right, that’s not cool, okay? That’s — First of all, that’s a classic. Secondly, the burger’s for emergency cases only.

Dean: I don’t like it. What’s the over/under this is a trap?
Sam: Well, it’s Rowena. Of course it’s a trap.

Naomi: Well, then, let me make it divinely simple for you. There are a grand total of nine angels in Heaven, present company included. And one or two on Earth, and… that’s all. We are the last men and women and divine waves of light still standing, as it were.
Castiel: No, that’s, uh… That’s not, um… I knew our numbers were small…
Naomi: You wanna know why we can’t help you? because none of us can leave, We’re the only things keeping the lights on. Barely. We need everyone, especially an archangel. Now the others thought any archangel would do. Long story. But your news about Gabriel is… for lack of a better word, blessed. With his power, we can keep Heaven running.
Castiel: And without him?
Naomi: Without him, in time, we’ll burn out. Heaven will crumble, and all the souls that have been entrusted to our care will fall back to Earth. Picture it, Castiel — billions upon billions of ghosts unleashed upon the world. All that chaos, all that death.

Rowena: It’s not easy to get Death’s attention.
Dean: Well, trust me, that’s not the kind of attention you want.
Rowena: Oh, but it is. Death has something I want.
Sam: What’s that?
Rowena: My son. After you told me he was gone, how he died, I had an unexpected reaction. We had our differences, but it’s my fault he went down the path he did. I left him.
Dean: We’re talking about Crowley — demon, King of Hell.
Rowena: We’re talking about Fergus — a man abandoned and loveless, tricked by a demon, died in a gutter. He deserved better from the world, from me.
Dean: Well, Crowley’s dead. There’s no coming back from that.
Rowena: Oh, is that so, Dean? Are only Winchesters allowed to come back from the dead? The rest of us just have to accept it? I don’t think so. I’m putting Death on notice.

Sam: No. No, no, no, no, no. No Rowena. I know what you went through and I know how much you lost and I realize how much you want your family back. But don’t do this, not like this. This is no you. Not anymore.
Rowena: What happened to me, those were my choices. But Fergus never… It wasn’t fair. It’s not fair!

Billie: You were never gonna kill him. There was a time you would’ve, but not now. I can see that.
Rowena: I don’t know what I’m doing.
Billie: Sometimes life is unfair and sometimes we lose things and sometimes we make mistakes. And some of these things can never be fixed no matter how powerful you become. Some things just are, and everyone has to live with that.

Rowena: I fought Death and lost. I feel tired. Weaker. I don’t know if it’s forever. Sam, what have I done?
Sam: You had a chance to kill me and — and you didn’t. I’d call that progress.
Dean: I’d call that a miracle.
Sam: And, you know, what happened with Crowley, that wasn’t your fault.
Rowena: He never had a chance.
Dean: He made his choices. Just like we all do. Look, every one of us has done something that we have to live with, that we’re trying to make up for. Every one of us.

Sam: But before you answer you gotta know something. Um… Lucifer is back.
Rowena: Of course he is.
Dean: Now you’re not gonna…
Rowena: Breakdown? Crack apart in terror? Of course I’m horrified and scared. My heart may have stopped, but… Lucifer isn’t the one who’s gonna kill me, is he?
Sam: You changed other people’s fates. Maybe we can change yours.
Dean: So. What do you say? You in?