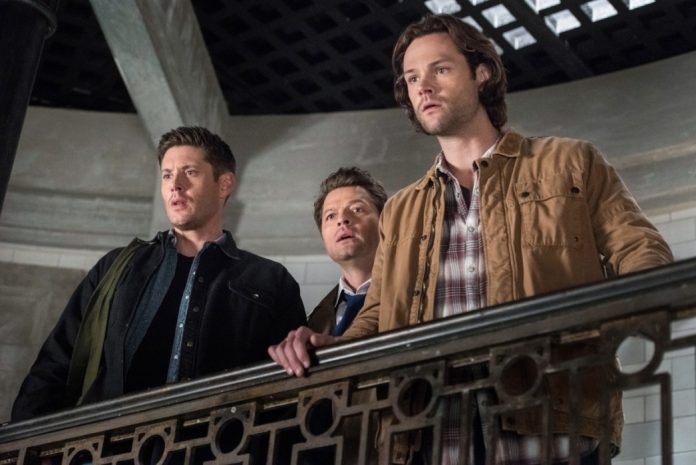 Mary: So what are you gonna do now?
Bobby: Honestly, I got no clue. Everyone seems to be settling in okay in town. Ketch is out doing Ketch things. Rowena and Charlie are road tripping it through the Southwest.
Mary: That’s trouble.
Bobby: Ginger trouble — the worst kind. Anyways without an archangel, it’s not like we can go back home. And I’m not sure I’d want to. I-I like it here.

Jack: Sam said you’re dead. He said Michael killed you.
Lucifer: Yeah, I don’t like to speak ill of people, but Sam is a big fat liar and he’s a bad person and like, freakishly tall, so…

Jack: Tell me the truth.
Lucifer: She saw me when I was scouting out the Bunker. She saw me and she screamed, and then so I crushed her skull with my bare hands. And it was warm and wet, and I liked it.
Jack: You’re not my father. You’re a monster.

Castiel: How do we stop him?
Michael: You don’t. After consuming the Nephilim’s grace, Lucifer’s juiced up. He’s super-charged. He’ll kill the boy, your brother. Hell, he could end the whole universe if he put his mind to it. And you thought I was bad.
Dean: No. No you beat him. I saw you.
Lucifer: When he was weaker, and I was stronger. Believe me, I’d love to rip my brother apart. But now in this banged up meatsuit not happening. This is the end, of everything.
Dean: No. What if — what if you had your sword?

Lucifer: Wow. Daddy Sammy coming to the rescue. But your little Jackie, the nougat-loving boy that you had before, he’s killed people. He’s got lots of blood on his hands.
Sam: I don’t care. He’s family.
Lucifer: Ha! What’s family done for anybody? My Dad left me, my brothers have tried to kill me. A lot. I’m gonna prove it to you.

Castiel: Dean, you can’t.
Dean: Lucifer has Sam. He has Jack. Cas, I don’t have a choice! If we do this, it’s a one time deal. I’m in charge. You’re the engine, but I’m behind the wheel.

Lucifer: Now I could — I probably should — execute you. I mean, really, really use my imagination. But I’m feeling generous today. So one of you is gonna walk out that door, and the other one will be laying dead on the ground. You choose.
Sam: No.
Lucifer: Or you could do that, and I can murder you both and end all life in the universe. Remake it in my image, better than Dad ever could. I’m thinkin’ mm fire-breathing dragons, sassy talking robots. I might give humans another chance if they know their place and worship me, ’cause I’ve earned it. But hey, it’ll probably take a few days to unravel the universe, Maybe, uh, 7, 10 days tops. So maybe, just maybe, one of you could stop me. Maybe. Well, let’s see. Clock’s ticking, guys.

Lucifer: You let my brother in.
Dean: Well, turns out, he and I have something in common. We both wanna gut your ass.

Sam: Michael.
Michael: Thanks for the suit.