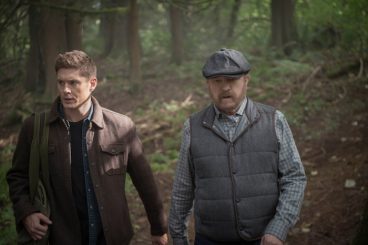 Dean: Something on your mind, Bobby?
Bobby: Yeah. Your brother. He let Maggie come here when she had no idea what she was walking in to. She wasn’t ready.
Dean: Oh, c’mon, when is anyone ever really ready?
Bobby: You are or you ain’t. A real leader would have seen that a mile away.

Mary: Sam. Watching you these last few weeks, you know what I’ve been saying to myself? ‘This is what he was born to do.’ If Bobby can’t see that, then it’s no
Mary: We’re hunting all the time. He won’t take a break, not even for a second. There’s something on his mind, and he doesn’t want to talk about it.
Sam: Have you asked?
Mary: Bobby’s not open like your dad.
Sam: Wait. Like my Dad?
Mary: Okay. At least he’s not like your dad was when I knew him.Sam: Well, I’m, uh still getting to know this Bobby. Um, our Bobby wasn’t the most open person either. Not at first. His wife, she, uh — she was possessed by a demon, and he had to take care of it himself.
Mary: They never had any children?
Sam: No. Anyway, point is, people put up walls for a reason. So, whatever your Bobby has behind his doubt it’s pretty. But you think I should try and find out? You know what? If you care about him, I think you should.

Sasha: You hunt monsters?
Dean: Oh, good. You told them.

Dean: Can I give you a little advice? Let it go. The past is There’s nothing you can do about it now, so it’s just baggage. Let it go. You’ll feel a lot lighter.
Sasha: Is that what you do?
Dean: I try. Every single day.

Bobby: Daniel you can’t be —
Daniel: What? Here? Real? But here I am. And, damn, this feels real good. C’mon, Dad. I know you’re curious — what they did, what you let them do. It’s kind of a funny story. They crucified me, piece by piece.

Neil: Hmm I thought when you showed up with that ridiculous ‘Historic Society’ story that you — he was testing me, making sure I kept up my end of the bargain.
Dean: What bargain? – Stop!
Neil: Find somewhere quiet, set up shop, kill as many hunters as I can. And in return, he’d give you an upgrade. It’s what he does. Djinn — What powers do we really have? Trapping our little flies, weaving our poisonous webs inside people’s minds. It’s all so limiting. Now, one touch — I read minds, see nightmares. And because of him, because of you, I can bring those nightmares into the world — make them do whatever I want. The old man? Rawling? His worst nightmare is dying in this house — unmourned, unloved, rotting away in the family crypt, alone with his own regret. It’s a tad macabre, don’t you think? Now, your little hunter girl? Hers were much more interesting. It’s a shame what those vampires did to her family. Quite a place she comes from, and your friend Bobby. The things slithering around in his mind.

Bobby: Daniel was my son. My wife, God rest her she didn’t die natural. Daniel and I buried her together. After well, hunting, that — that’s what got us through. Then the angel war started. I’d been called up to serve before, so they gave me a platoon, I guess you could call it. Dan was in it. We got separated. I guess you can figure where this is headed.
Mary: It wasn’t your fault.
Bobby: I’m the one that brought him to war. I’m the one who sent him to die. I don’t even know what they did to him. The angels took them. We never found the bodies. I never figured I’d be any kind of a father to a child. But Daniel. was the best thing in my life. I always assumed that war’d kill me, too, but it didn’t. I guess lately, I’ve — I’ve been looking for other options.
Mary: The hunting.
Bobby: It ends the same.
Mary: No. You are not allowed to give up on me.
Bobby: I don’t — I don’t know any other way to live.
Mary: Then we’ll find one.

Sam: Dean —
Dean: I know, I know. Not my fault. It’s Michael. It’s all Michael. You know, I’ve been trying to — not forget, but to move on from what I — from what we — from what he did. And I got to be honest, I was — I was starting to feel like myself again. Almost.
Sam: So we’ll work harder.
Dean: How, Sam? You get sleep three hours of sleep a night.
Sam: All right, then — then — then I’ll sleep two. Dean, we’re going to find Michael, and when we do, we will kill him.
Dean: How?
Sam: I don’t know. We’ll — We’ll — We’ll track down Dark Kaia and her spear. We’ll — We’ll find something.
Dean: I hope you’re right.