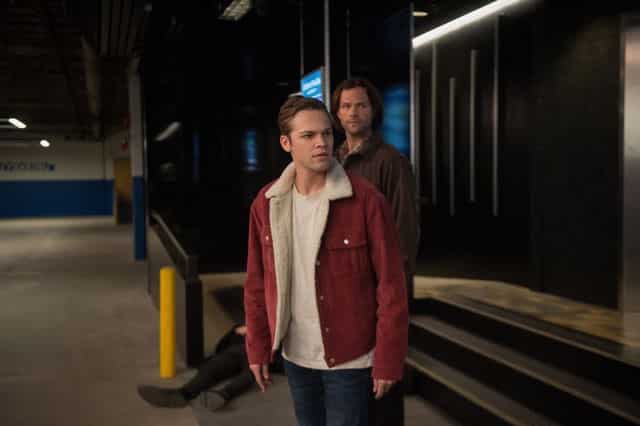 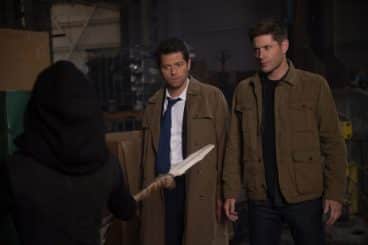 Castiel: Jack. If you can’t sleep, that’s understandable, given recent events.
Jack: You mean dying and coming back to life.
Castiel: Yeah, we’ve all been through it. It’s something of a rite of passage around here.

Jack: Cas. The deal you made why can’t Sam and Dean know?
Castiel: They can. I-I just don’t, I don’t want them to. They don’t need that burden. You don’t need that burden.
Jack: Of course I do. You did that for me.
Castiel: You know, the Empty said that it wouldn’t come for me until I had finally given myself permission to be happy, but with everything we have going on, with — with Michael still out there, I don’t see that happening anytime soon. This life may be a lot of things, but it’s rarely happy.

Garth: Look, Sam, I knew this was a risky one. Besides, I’ll just pull the old fake-swallow and-spit-it-out-later cough syrup trick.
Sam: What?
Garth: Used to work on my Mom. Well, most of the time.

Dean: Listen to me. Michael conned me. Kept me trapped and drowning inside my own body. Now, when you and Sam were possessed by Lucifer, I — I thought I understood, but I didn’t, not really. So, yeah, if we get a chance to trap him, I’ll take that, but I won’t be truly happy until he is dead and I kill him. And now I have a chance to do that, so, yeah, I’m good. Let’s go.

Dean: Look, we didn’t come to fight you for it. I came to ask.
Dark Kaia: You should know by now I won’t give it up.
Dean: Well, then, you should just kill me. There are people that I care about — my family — and they’re in danger. Michael, the one who tortured me, the one who tortured you — he’s gonna hurt them and kill them. And then, worse. Thousands will die. And the only thing in this world that will stop him is the spear in your hands. So if you’re not gonna give it to me, kill me.

Dark Kaia: I came here to escape a life of running from monsters. But here, it’s no different, not for me. Michael’s monsters haven’t stopped hunting me. At least over there, I understood things — the world, my place in it. The magic I used to get here, magic from my home — it doesn’t work here. To get back, I need help.
Jack: Why am I here? Why didn’t you just kill me?
Michael: In your present, powerless condition? Why would I bother? Are you familiar with Kansas City — the people, the terrain? Back in my world, I enlisted a garrison to invade it. We leveled it. Death from above. But there was human resistance. Things got messy. I’m trying something different this time — an insurgency from within. My monster army turning every last man, woman, and child — a wave of transformation. Vampires or werewolves — it won’t matter which. Everyone they turn will be mine. No muss, no fuss.

Jack: My uncle’s in the Cage. And you — you’re not family.
Michael: Well, not literally, no. Our connection, our relation is more a matter of scale of power. Haven’t you learned yet? In this reality, monsters, humans, even angels — they are insects, atoms compared to us. But you — you’re just a child, a mere infant. For you, the past two years — the entirety of your existence — feel like eons. You don’t even know what time is. But you will. Real time, the time that makes mountains, that wipes out species. You’ll see it all with me. Year by year, century by century, and as your power returns and grows, we’ll only become more alike. Oh, I know. Your loyalty to Castiel, the Winchesters, the rest of humanity? It will fade. And so will the minor differences — angel armies versus monster armies, this Kansas City or that Kansas City, one world from another — they’ll fade, too.

Sam: Walking right into a trap.
Castiel: Which is set by a full-powered archangel.
Dean: Impossible odds. Feels like home. Let’s do it.

Michael: When I gave up Dean, you didn’t think to question it, to ask why? Dean was resisting me. He was too attached to you, to all of you. He wouldn’t stop squirming — to get out, to get back. So I left but not without leaving the door open just a crack.
Castiel: Why wait?
Michael: To break him, to crush and disappoint him so completely that, this time, he’ll be nice and quiet for a change — buried. And he is. He’s gone. And now I have a whole army out there, waiting, ready for my command, ready for this.