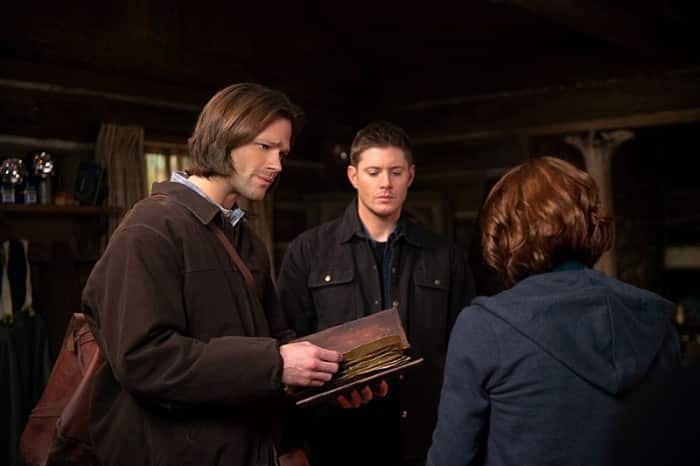 Metatron: “That song is a classic. Yeah, I hear you, I do, and you’re right. Inclement weather on the day of your nuptials and the wrong cutlery at inopportune times is hardly ironic. But it sure is catchy.”

Castiel: “Can I just kill him now?”

Charlie: “I’m in a phone booth. A phone booth! I didn’t know these things existed outside of Bill and Ted’s.”

Charlie: “Did you know dental floss works great on stitches? I only passed out twice and I’m pretty sure my wound is now minty fresh.”

Dean: “It has been one crap sandwich after another for the past few weeks. You heard Charlie, we got a chance at fixing this thing. So if that’s don’t put gas in your tank, well…”

-Dean: “We’re due for a win, okay 0 for 2. I’ll tell you another thing, if this actually does work, we can take some time off.”

-Dean: “Mmmhmm. And I’m not talking just a weekend in Vegas or sitting in some crap motel watching pay-per-porn. No I’m talking about a beach, drinking cervezas, mingle with the local wildlife. When’s the last time either one of us was on a beach?”

-Metatron: “Oh em me. Food, glorious food. All the countless descriptions in so many books, but those were just words. The taste, I mean the actual taste — I had no idea. And the process, comes in here, and comes out here. Sorcery. I mean you used to be human, don’t you miss all this?”

-Metatron: “No-no not that. I mean don’t you miss the feeling of all this; the taste of these waffles, the sound of a child’s laughter. Look at us, we’re a couple of angels who have touched not only the divine, but the mundane. You and I have a lot in common.”

Metatron: “The process? Goes in here, comes out here. Sorcery!”

-Metatron: “Sorry about the mess, I guess I’m lactose intolerant.”

Charlie: “Okay here’s what I learned so far. About 700 hundred years ago, a nun locked herself away after having visions of darkness. After a few decades squirreled away by herself, she emerged with this. Each page is made out of slices of her own skin, and written in her blood. I told you it’s ickish. According to the notes I found, it’s been owned and used by cults and covens, even the Vatican had it for a while.”

Charlie: “Let’s get our Alan Turing on, decrypt this bitch.”

-Sam: “Until what? Tell me. Until what, Dean? Until I watch you become a demon again, until then? I can’t do that, I won’t do that.”

-Dean:  “Well then you’ll just have to lock me up, bind me to the Bunker like you did last time.”

-Sam: “Look jut let us translate the book, okay. if there is a cure we’ll do it and deal with the consequences later. I can’t lose you.”

-Dean: “You change your mind on that ’cause that’s not what you said last time.”

-Dean: “This is my cross to bear Sam, mine. And that book is not the answer, now we gotta destroy it before it falls into the wrong hands, and that includes me.”

-Metatron: “We really do make a good team. Kind of like a buddy comedy, without the comedy.”

Charlie: “I haven’t been a Hunter for very long, but it feels like this is a life. Mostly ends in Sophie’s Choices, death or tears. Usually all of the above. How did this become my life? I was gonna own my own start-up, marry ScarJo, invent something cool. Now I’m just happy to be alive.”

-Charlie: “What did Dean mean? When he said you changed your mind?”

-Charlie: “And let me guess, in doing so, he did something you didn’t want and that pissed you off? And you said something that hurt him?”

-Sam: “Yeah, that sounds about right.”

Charlie: “I thought you’d be shorter.”

Sam: “I don’t trust you. And I never will. But I need help. And this is right in your wheelhouse.”