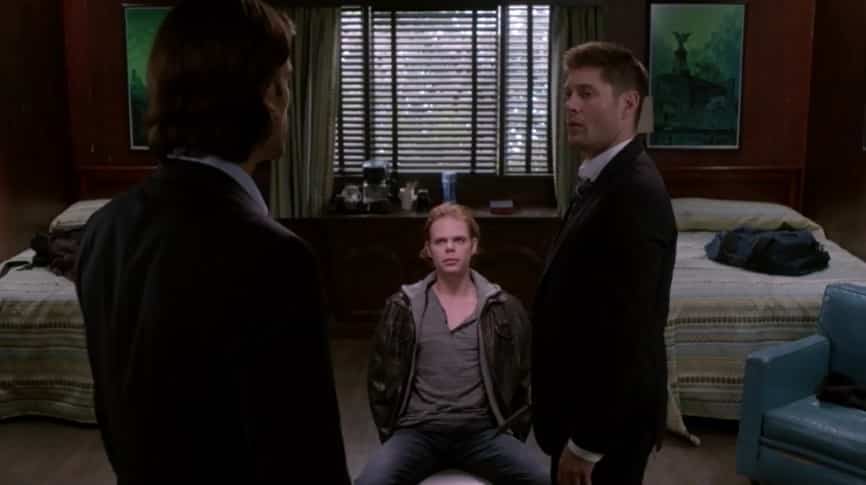 Dean: “I thought you were going with socially acceptable binge watching. You know – The Wire, Game of Thrones.”

Dean: “Why would a demon order a hit on a guy with no soul? That’s like a crackerjack, but not a prize.”

A demon: “Demon souls, they do a body good. The little muppet tore through half my buds before Crowley put her on a diet.”

Sam: “Why would Crowley have Amara on Earth in the first place? Wouldn’t it be smarter to keep her in Hell?”
Dean: “Yeah, but then he’d have to spend more time there and he hates that place.”
Sam: “Oh right. I keep forgetting about you and Crowley’s summer of love.”

Crowley: “What are you looking at? Still learning all you can about the world?”
Amara: “If nonsensical slogans attached to idiotic pictures of domestic animals counts as the world.”
Crowley: “Excuse me?”
Amara: “Memes.”

Metatron: “Real-life angel caught on tape? That is way better than some random homicide.”

Metatron: “Do you have any idea how much stuff I had to steal and then pawn to pay for that?”

A demon: “You’ll see a nearly 40 percent decrease in soul collections in the Pacific Northwest over the past three years. An unexpected consequence of legalized marijuana? Some analysts thinks so, others are not quite so sure.”

Metatron: “What century are you in? Religion is dead. The novel? Deader. You think I’m ashamed for dealing in fleeting visual sensation, in GIF-length glimpses of horror, waste and degradation? No! I just caught up with the times.”

Metatron: “Reality is the great literature of our era. And I am out there on the streets every single night capturing it. I am reality’s author.”

Crowley: “Do you know how disturbing it was to realize that I couldn’t bring myself to kill you? I’ve had tons of chances over the years, some you don’t even know about, but still, I made my peace with it, embraced my softer side, learned to accept there was just too much going on between you and I. Bromance.”

Crowley: “I think I am gonna kill you today. I feel different somehow, ready. What can I say, fatherhood changes a man.”

A demon: “A Hunter. You of all people should know, pacifism doesn’t pay.”

Metatron: “I was faking it. I mean, I thought, how hard could it be? I can’t take anymore. Not a single human day. The indignities, they just don’t stop. Making my rent and getting my phone charged and hemorrhoids.”

Amara: “You were the first thing I saw when I was freed and it had been so long. Maybe that’s it, my first experience of His creation. You can’t help but represent that for me, the sweet triumph and the even sweeter folly of what He’s wrought.”

Metatron: “What He did? Creation? That took work. It took sacrifice. In order to create the world, God had to give up the only thing He’d ever known. He had to betray and sacrifice his only kin: the Darkness, His sister.”

Amara: “There’s a whole world out there for m e to explore and I can practically taste it. Soon I’ll be strong enough to do what I came here to do, settle an old score. The oldest score.”