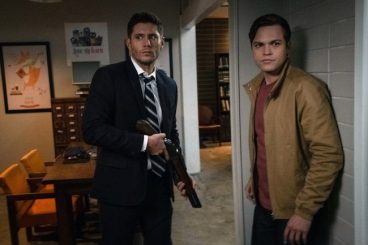 Jack: Dean, I need to do something. You don’t understand. I could have killed Michael. Here, when I was strong enough, I could have. But there was so much going on, and then everything else happened because I was distracted and stupid and —
Dean: Hey. You didn’t do anything wrong.
Jack: And neither did you. But that doesn’t make it any easier, does it? So, I can’t just sit here in the bunker thinking about it all day. What I could have done differently, how I can’t do anything about it now. But I can do this. I can hunt. Give me a chance.

Jack: What’s ‘courting?’
Dean: It’s what you do before you start dating.
Jack: Oh, and that’s the thing you do before the sex.
Wanda: Sometimes you just have the sex.

Charlie: Sam, before all this, I was just a programmer at Richard Roman Enterprises. I lived with the love of my life, and we —
Sam: Wait, you — you did?
Charlie: Yeah. So, your Charlie she… I guess she never met Kara.
Sam: Kara?
Charlie: Uh she owned a bakery outside of Chicago. Cupcakes. It was like something out of a storybook. She always smelled like peaches, and her smile was just Michael and Lucifer, when they started their war, first thing, a giant EMP or something like it went off over North America. Fried every bit of technology. Cellphones, power plants. For the first few days, we banded together. Thought, ‘Hey, someone’ll save us.’ No one ever did. When the food ran out, people got mean. Mobs started forming, stealing whatever they could get their hands on. A lot of people died. Kara died. People are always the same when things go wrong — they lose it. One day, the water gets shut off, the next day, people are on fire. It’s a fact about society — it all falls apart.

Sam: Oh, great. Our perp might just be a giant fly with low self-esteem.

Dean: Look, I promise you that Harper Sayles is not in love with you, okay? Would you calm down?
Jack: Okay. But if she is, I need to know everything about sex. Go.

Sam: Charlie, you can’t just quit and go live on a mountain somewhere. People need people.
Charlie: Why? ‘Cause they’re the luckiest people in the world?
Sam: No, come on. We just do. We’re social animals.
Charlie: Emphasis on ‘animals.’
Sam: Yeah, but you’re also a hunter. The things that we’ve seen, it’s not so easy to just walk away from it all.
Charlie: Believe me, I’ve tried.
Sam: Our Charlie tried.
Charlie: Yeah, well, again, she ain’t me. It’s my life, Sam. Not hers and not yours.

Jack: What are you doing?
Harper: What? He’s my boyfriend. He just gets a little jealous sometimes.
Jack: But he’s dead. And stalking you.
Harper: No, he’s stalking you. It’s a little game we play. Some people pretend to be naughty nurses, some people get tied up. We do this. Oh, and he has to eat flesh to maintain his body. Stupid magic. But it all works out. Except not for you. I’m sorry about all this, Jack. I actually think I liked you. But you’re obviously a hunter, and I come from a long line of necromancers. I mean, I can mostly only raise the dead, but that comes in handy. And I can’t let you or your friend get in the way of the love Vance and I share. It’s first love, Jack. The best kind. Without baggage or compromise. I mean, I did have to kill him to keep him here after college, but every relationship has its stuff, right? And all the other guys — none of them are like Vance. Strong and courageous and — So, they all had to die. Especially Miles, who just — ugh. So, I had Vance crush his throat. I wish I could have watched. And now we’re going to kill you.

Charlie: I wasn’t looking for love. I found it, and I lost it. And I didn’t kill people and literally nest in their body parts, so…
Sam: Okay, I know, I know. How about this? Don’t leave. Hear me out. Sure, some people can do bad things when they’re desperate or scared, but I mean, the guy we just saved, he has a wife, children. I’m not saying all people are good people or even that most people are, but if we help people, then maybe they’ll help people and all that. And that’s worth it. Even with all the tears and death — it’s worth it.
Charlie: Just to be super clear, I am not like the fly monster.

Harper: ‘Jack. I’m already writing — isn’t that crazy? I’m not crazy. But our love is so vivid. I can’t wait to find you. You’re the first man to ever get me to leave McCook. Now I’m in the world. I’m sorry I have to kill you for what you did to Vance, but then I can bring you back so that we can be together again. It’s gonna be perfect. See you soon. Love, Harper.’

Dean: Okay. All right. Look, it’s not about being right, okay? You’re gonna make mistakes. Hell, I make them all the time. But it’s how you handle yourself once you’ve made those mistakes. And you learn from them.
Jack: And how to not beat yourself up over them?
Dean: You know, Jack, you’re pretty smart sometimes. I tell you what — when Sam gets back, I’ll talk to him about getting you out on more hunts. Okay? In the meantime, we’ll get you a crate of cough drops.
Jack: I’m fine. It’s all part of being human, right?