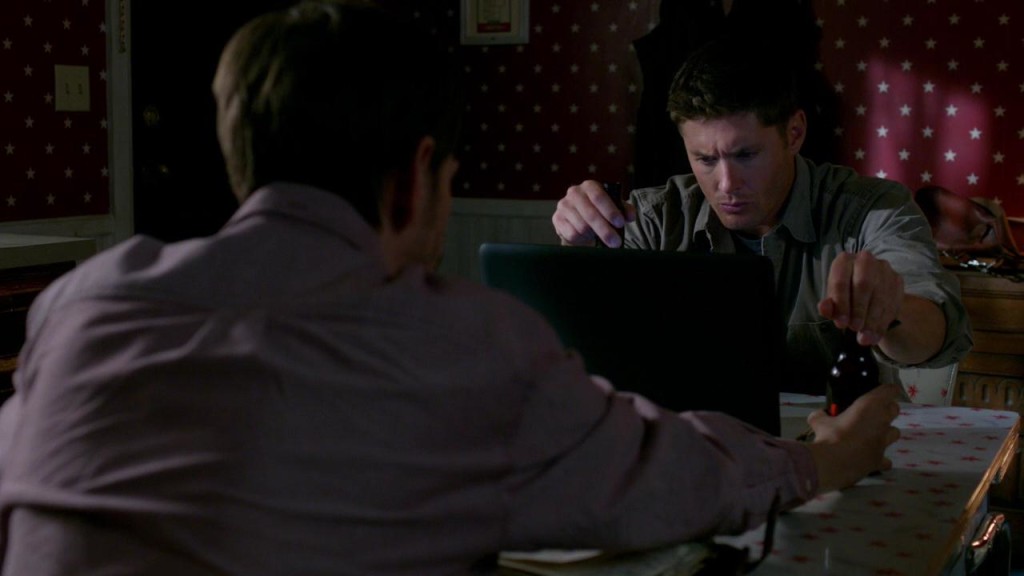 Dean: “Besides the fact this is making my head hurt, how does this add up to a ghost?”

Carl: “I don’t think so. There’s unfinished business thanks to you. Oh the spectre likes you.”
Dean: “Oh yeah. Why don’t you tell him to come out here. We’ll make promise bracelets.”

Dean: “Easy there flyweight. Last time you drank a beer, I had to pick you up off the floor.”

Garth: “I kind of feel like we should say something alright? Don’t you? Just a little…”
Dean: “Sure. We won.”

Amelia: “So I moved here and became even more of a hot mess than I already was and you hit a dog.”

Garth – “So Dean, give me the skinny. Where were you last year?”
Dean: “Why don’t we save what I did on my summer vacation for another time?”
Garth: “Aww come on.”
Dean: “Alright. I was in Purgatory.”

Garth: “Bobby was gone. You two were MIA. It was a weird time. Somebody had to step in and take up the slack. Alright, let’s just get back to work and we’ll talk about this later alright?”
Dean: “Did Garth just tell us what to do?”

Garth: “I mean it just seems like you and Dean are talkin’ but nobody’s listenin’…..”

Dean: “Because Sam, Kevin’s in the wind okay? You’re sulking around like a eunuch in a whorehouse and I can’t help but ask myself when is decapitation not my thing.”

Dean: “What? You….you were a dentist?”
Garth: “Yeah just like a hot minute. Where’d you think I got my first case?’
Dean: “Let me guess. Tooth fairy.”
Garth: “Yeah. Man I felt terrible when I ganked that SOB.”
Sam: “You killed the Tooth Fairy.”
Garth: “Yeah man. It’s not my proudest moment but it happened.”

Dean: “I guess people change don’t they? Hmm we let that werewolf Kate go.”
Sam: “She was different. She…You think Benny’s different? Huh, he tell you he’s not drinking live blood or something? And you believe him. Wow! Okay. No you’re right. People do change.”

Sam: “I don’t pity you. Okay, I don’t. You and I, we’re a lot of things but we’re not to be pitied. Look I lost my brother, Dean, a few months ago. It felt like my world imploded and came raining down on me and I ran just like you.”

Sam: “Alright, you’ve said it. We both played a little fast and loose.”
Dean: “Yeah I might have lied but I never once betrayed you. I never once left you to die and for what? A girl. You left me to die for a girl!”

Garth: “Bobby belonged to all of us Dean, not just you and Sam. I’m just taking what he showed me and trying to do something with it. That’s all.”

Sam: “Come on Dean. I know it’s not you in there pulling the strings.”
Dean: “Shut up. Don’t. You never even wanted this life. Always blamed me for pulling you back into it.”
Sam: “That’s not true.”

Dean: “Yeah, I’ve got a vampire buddy and you turned your phone off for a year.”
Sam: “Don’t turn this on me.”
Dean: “Look. If Benny slips up and some other hunter turns his lights out, so be it.”
Sam: “But it’s not going to be you right?”

Sam: “Own up to your cr** Dean. I told you from the jump where I was coming from, why I didn’t look for you, but you…you had secrets. You had Benny and you got on your high and mighty and you’ve been kicking me ever since you got back. But that’s over. So move on or I will.”

Dean: “Shut up! Mistakes, hhh. Well let’s go through some of Sammy’s greatest hits. Drinking demon blood, check. Being in cahoots with Ruby. Not telling me that you lost your soul or how about running around with Samuel for a whole year, letting me think that you were dead while you were doing all kinds of crazy. Those aren’t mistakes Sam. Those are choices.”

Sam: “I don’t know Dean. How about because you haven’t said a word to me since Prentiss Island and now what? You want me to shut up and ride shotgun and act like nothing happened?”
Dean: “You want to talk about Benny. Fine. Let’s talk.”
Sam: “Okay. How about he’s vampire.”
Dean: “He’s also the reason I’m topside and not roasting on a spit in Purgatory. Anything else?”
Sam: “Don’t pretend I don’t get it. I know you had to do what you had to do down there.”
Dean: “I highly doubt you get anything about Purgatory.”
Sam: “But you’re out now and Benny’s still breathing. Why?”
Dean: “He’s my friend Sam.”

Garth: “Come on Dean. You do not want to kill your brother. You…you’ve been protecting him your whole life. Don’t stop now.”

Dean: “You should have looked for me when I was in Purgatory.”

Dean: “He left me to rot in Purgatory.”
Garth: “Alright, alright, maybe he did. I don’t…I don’t know. I wasn’t there but I’m sure he had his reasons.”

Dean: “Benny’s been more of a brother to me this past year than you’ve ever been. That’s right. Cas let me down. You let me down. The only person who hasn’t let me down is Benny.”

Dean: “He’s my friend Sam.”
Sam: “Uhhh, and what about my friend, Amy? She was what? Because you sure as hell didn’t have a problem ganking her.”
Dean: “I guess people change don’t they?”

Sam: “Good. You know what hear this too. I just might be that hunter who runs into Benny one day and ices him.”
Dean: “I guess we’ll cross that bridge when we come to it won’t we.”
Sam: “Yeah. Yeah you keep saying that.”

Garth: “You’re such an idjit.”