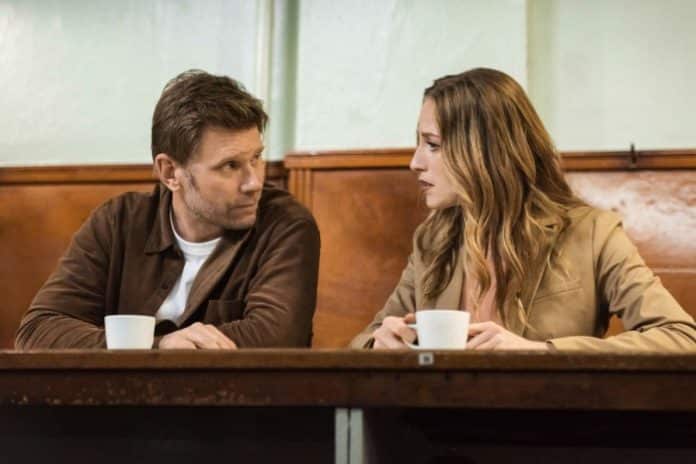 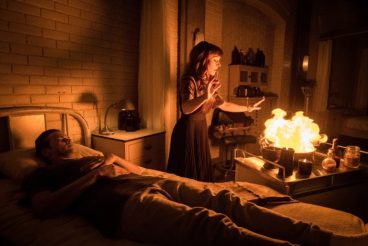 Dean: He’s dead.
Nurse: Cause of death?
Castiel: He was stabbed through the heart, and he exploded.

Dean: Okay, you know what? We don’t have time for this. All right, he’s sick. His name is Jack Kline. His father exploded. There you’ve got all the basics. Now what does he need to do to see a doctor?

Jack: I’m Jack. And I know people have a lot of strong feelings about my father, but I’m — I’m trying hard not to be like him.

Rowena: It’s as I suspected. A Nephilim, for all its power, is an unnatural presence. Part human, part angel… It — it doesn’t quite fit. It’s delicate. Its grace is what holds it in balance, and when Jack’s grace was taken from him, his being fell into chaos. The — the cells are gobbling each other up.
Castiel: Well, if it’s grace he needs, he can have mine.
Rowena: No, dear, it won’t do. Jack is part archangel. He needs a stronger force and probably some kind of magic, and needs it quick. I don’t… I don’t exactly know but he’s enterin’ a critical phase. Sometimes he’ll look just fine, but then his body will give way and… it’ll be the end of him.

Jack: Since I’ve been alive, everyone assumed that I would be this special ‘person’ who goes on forever. Only now it looks like forever might be a couple of weeks, so —
Dean: We don’t know that.
Jack: What I do know is I’m done being special. Before my life is over, I want live it. I-I just want a chance to… get a tan… to see a hockey game… get a parking ticket… get bored… and when it’s all over… die.

Castiel: I, uh… I feel the need to do something. And I think Dean’s right. We can’t afford to overlook any possibility. He seems to be taking this particularly hard.
Sam: Yeah, yeah. Yeah, he — he, uh, was pretty rough on Jack at the beginning, and… I don’t think he’s forgotten. And I know he hasn’t forgiven himself. You know, he’s lost people, we’ve all lost people, but, um…
Castiel: This feels different. Losing, um… a son… feels different.

Dean: Well, bait and beer. You are a cheap date. This certainly isn’t Tahiti.
Jack: You once told me you and your father did the exact same thing. It was your happiest memory of him.
Dean: I didn’t say that.
Jack: It was how you said it. I could tell. I guess my point is that… if I don’t make it… The stuff I’d miss — it wouldn’t be things like Tahiti. Or the Taj Mahal. I’d miss more time with you. I’m getting that life isn’t all these big, amazing moments. It’s time together that matters. Like this.
Dean: Well, who’d have thought hanging out with me would make you sentimental?

Castiel: You need to come at once.
Sergei: I don’t make house calls.
Castiel: Jack isn’t just another sick kid. This is the son of an archangel of the Lord. Who is much more ill now because of your ‘harmonics.’
Sergei: And? Science is sometimes trial and error. Victory through experimentation.
Castiel: This was an experiment? You never said that. If Jack dies, I will find you.
Sergei: You can try.

Nick: All right… I’m not very good at this, but the priest said it would help, so, um… I’m gonna try. I say that I do the terrible things I do because I couldn’t find who killed Sarah and Teddy. And that once I did, I’d be free of this darkness and this rage… but I lied. Truth is… I like doing these things, and I don’t want to stop. I’m bonded to you and what you are. I mean, it’s — it’s — It’s how you first found me. I don’t know who I am if I’m not you. No consequences. No pain. No sorrow. I want that back. I want it back. I don’t want to feel now what I didn’t feel then. Where are you? Where are you? Help me. Help me.

Dean: I shouldn’t have done it. I shouldn’t have taken him out.
Sam: It was what he wanted. I mean, we knew he was going to get worse, regardless.
Dean: Yeah, but it was too risky.
Sam: Yeah, but, Dean, life, all of it, is a risk. Jack knew that. And you made him happy.
Castiel: You did more for him than any of us.

Dean: So, what can we do?
Rowena: Watch over him. Stay by his side… as he dies.