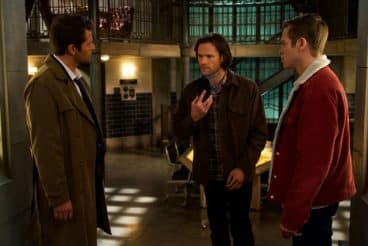 Michael: Now, this just feels right. Hope is an amazing thing, isn’t it? You had no chance of winning this. None. But you had hope — hope that I wouldn’t see you coming, but I saw everything. And now I have my perfect vessel. I’ve just destroyed the one weapon that could really hurt me. Thanks for bringing that, by the way.

Sam: Where’s Jessica?
Violet: Well, my name’s Violet. It’s my shift. We have shifts now, because you mess up so, so many things.

Michael: Yes, uh, put a chair against the door. That’ll help. Nothing’s changed. Either my monsters get here or I break these chains. But tonight everybody dies. And, Sam? The last thing you’ll see is this pretty smile as I rip you apart.

Jack: Sam and Dean — they’re gonna beat you.
Michael: Oh, please. Sam’s in so far over his head, he’s drowning. And Dean? Well, I’ve got Dean under control.
Jack: No. Dean — he’s strong.
Michael: He’s a gnat. I’m a god. Who would you bet on? You don’t know anything about Dean. I’m in his head literally. I know everything. Like, I know how sad he was when you died on the outside. On the inside, well, it’s not that he was happy — he just didn’t care. ‘Cause you’re not Sam. You’re not Cas. You’re a new burden that he was handed. You’re a weak, helpless thing. You think that they care about you, love you? You’re a job, a job none of them wanted. And you —

Michael: Tell me. Why do you love this world enough to risk your own life?
Castiel: Tell me. Why do you hate this world enough to burn it to the ground?
Michael: Because I can. Because me and my brother — my Lucifer — when we fought in my world, we thought that God would come back, give us answers — why He’d gone, what we’d done — but, instead, do you know what happened? Nothing. No God. Nothing. And now, now that I’m in here — now I know why. God — Chuck — is a writer, and like all writers, He churns out draft after draft. My world? This world? Nothing but failed drafts. And when He realizes that they’re flawed, He moves on and tries again.
Castiel: No, that’s not how. Why would He do that?
Michael: Because He doesn’t care! About you, me — anything. Now, at first, I thought I’d do it better. Show Him. Be more God than God. But now I just want to burn every one of His little worlds until I catch up to the old man.
Castiel: And then what?
Michael: Even God can die.

Jack: Well, if it doesn’t, maybe there’s something I can do. The magic that’s keeping me alive, what if I can do more?
Sam: And burn off your soul?
Jack: Not all of it.
Sam: Jack. Dean wouldn’t want to be saved, not that way.

Sam: Dean thrives on trauma. I mean, he’s had to his whole life, right? It keeps him alert, keeps him ready, but if I wanted to distract Dean, I-I I’d give him something he’s never had before.
Castiel: Contentment.
Sam: Exactly. So maybe, instead of looking through his bad memories, maybe let’s, uh maybe let’s look through his good memories.

Michael: Well, this is fun.
Dean: Get out of my head.
Michael: You don’t mean that, Dean, not really. You may lie to them, but, deep down, I know you. I am you. You only tolerate the angel because you think you owe him, because he ‘gripped you tight and raised you from Perdition.’ Or whatever. But since then, what has he done? Only made mistakes, one after the other. And, Sam — oh, Sam You know, Dean was his happiest when you quit hunting, leaving him with your dad, just the two of them. See, deep down, he knows that you will always abandon him, again and again.
Dean: Shut up!
Michael: You don’t need them. You don’t even like them. They’re not your family — they’re your responsibilities. They’re a weight around your neck. And deep down, you wanted — you were desperate to get away from them. And that is why you said yes.

Michael: You fellas didn’t think this out, did you? Even if you could force me out, what do you think I’d leave behind, hm? You’d be nothing but blood and bone.
Dean: Then we don’t kick him out. We keep him in. It’ll hold. My mind, my rules. I got him. I’m the Cage.

Dean: You broke the rules.
Billie: I took a calculated risk. I warned you. About the dangers of jumping from world to world. But you ignored me, didn’t you?
Dean: Rescuing Mom and Jack, helping out those other folks — I’d say it was worth it.