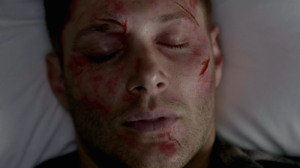 Sam: I just thought you might like to know that while you two been playing Odd Couple…

Metatron: Humpty and Dumpty are starring in their very own version of Locked Up Abroad: Heaven right now.

Demon Masseur: You know… with so many demons having rallied back to your side, well, it’s only natural that they would look to their… king for some direction.
Crowley: Love, if I wanted a soapy massage from Dr. Phil, I would have hit 3 on the speed dial, all right?

Dean: What the hell is happening to me, you son of a bitch?
Crowley: Liquor before beer, bad taco? How should I know?

Dean: You are nothing but Bernie Madoff with wings.
Metatron: So I’m a fake. Do you have any idea how much pancake makeup and soft lighting it took to get God to work a rope line? He hated it. And, you know, humans sense that. So they prayed harder and longer and fought more wars in His name. And for what? So they could die of malaria? Leukemia? And all the while, blaming themselves. “Oh, if only I’d been more prayerful, God would have loved me! God would have saved me!” You know what? God didn’t even know their name. But I do. Because I’ve walked among them. And I can save them.

Gadreel: So you said you had a plan,  how we might convince them let us pass?
Castiel: Wookie.
Gadreel: Brother, i have no idea what that means.
Castiel: It’s a refernce to a very popular film that … Never mind.

Gadreel: When they say my name, perhaps I won’t just be the one who let the serpent in. Perhaps I will be known as one of the many who gave heaven a second chance.

Dean: What happened with you being okay with this?
Sam: I lied.
Dean: Ain’t that a bitch.

Gadreel: The only thing that matters in the end is the mission.

Sam: I guess one of us doesn’t need a demon to follow a clue trail.

Sam: Listen to me. it’s better this way.
Dean: The mark it’s making me into something i don’t wanna be.
Sam: Don’t worry about the mark. We’ll figure out the mark later. Just hold on okay?

Dean: I gotta say something.
Sam: What?
Dean: I’m proud of us.

Metatron: You didn’t read enough. You’ve never learned how to tell a good story.
Castiel: But you did.

Metatron: The angel tablet, arguably the most powerful instrument in the history af the universe, is in pieces. And for what, again? Oh, that’s right.. To save Dean Winchester. That was tour goal, right? I mean, you drape yourself in the flag of heaven, but ultimately, it was all about saving one human, right? Well, guess what? He’s dead too.

Sam: Damn it, Crowley. You got him into this mess you willget him out.

Crowley: Listen to me. Dean Winchester. What you’re feeling right now is not death it’s life a new kind of life. Open your eyes, Dean. See what i see. Feel what i feel. Let’s go take a howl at that moon.

Πολύ καλό. Έχω κι εγώ να προσθέσω το : Dean: What happened to you being ok with this? Sam: I lied..