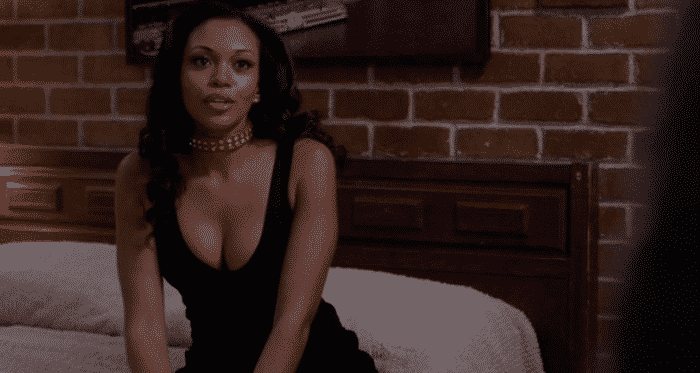 Dean: “She can stay the night.”

Witch Snitch: “Look Detroit, I pride myself on reliable sourcing. There is however a lot of chatter about our James.”
Portia: “What kind of chatter?”
Witch Snitch: “That he’s gone Ripper.”
Dean: “As in Jack the..”

Portia: “James are you sure you’re still even able to do this?”
Dean: “Oh well that’s a confidence builder. Anything else I should know before I become some disembodied thing completely at his mercy.”

Dean: “Of course, he’s got the booga booga on his side.”

Dean: “I’m sorry. Is this you trying to talk us out of ganking James or…”

Dean: “Man you know that we’ve never actually seen this witch-killing spell of Bobby’s work right. I mean this is not a sure thing.”
Sam: “Is anything we ever do a sure thing?”
Dean: “Well no but I would just like to have the odds in our favor as much as possible.”
Sam: “Right.”

James: “What’s happening to me?”
Dean: “Well how about this. You p** off another witch and he or she hexed you and forced you to uh…”
James: “It’s possible I suppose but I never heard of it.”

Portia: “I’m a familiar.”
Dean: “A what?”
Sam: “Companion to a witch. Some witches split their time between human and animal form.”

James: “I don’t know what’s happening to me. These dreams….they’re like um, like torture.”
Spencer: “You didn’t mention dreams.”
James: “Dark, bloody. Spencer they uh…they scare the hell out of me. They’re so real. Just night after night.”

Dean: “So these dreams James is having, he thinks that they are real. He thinks that he is actually killing people.”

Dean: “Cause you know we could find another devil dog. You could tag out. I could snuff the SOB…”
Sam: “Dean, Kevin doesn’t even know what the next trial is yet so whatever it is you’re worried about, stop. I’ll be ready.”

Spencer: “Oh she’s way more than familiar isn’t she? When she picked you as master, I endured it, but when you two went all Bella and Edward, broke the code, put your passions before the community rules….well the arrogance, the entitlement was too much. Your total ruination seemed appropriate.”

Dean: “Witchcraft James? Really? What the hell are you thinking?”

Portia: “He can’t go to the police and he doesn’t trust other witches.”
Dean: “But he trusts us? I mean you do know who we are right? We’re the last people that somebody like James needs to be telling his troubles to.”

Dean: “You sure.”
Sam: “Yeah.”
Dean: “Because you did just gank a hellhound, which is no slice of pie and uh, there is a minefield of who knows what cr** ahead. I just want to make sure that you are okay.”
Sam: “I’m good.”

Dean: “You know, once I get this put together, we can’t hesitate. If we’ve got to use it, we use it.”
Sam: “You mean if we find the witch that’s doing this to James.”
Dean: “Or if there is no other witch.”
Sam: “Or it wouldn’t be the first free pass we’ve given Dean.”
Dean: “Look I like James as much as the next guy but people are getting ganked here. Besides Benny, Kate, they were forced to be what they are. James chose this.”

Dean: “Look we get too far down the road with this, we can’t go back and it will be too late for me to jump in.”
Sam: “And who says that you’re going to have to? You know maybe I’ll actually pull this one off.”
Dean: “I’m just saying…”
Sam: “I know what you’re saying Dean. You’ve said it. You know I’ve been going over this and over this, asking myself why doesn’t he trust me and it occurred to me finally. It’s not that you don’t trust me. It’s that you can only trust you.”
Dean: “You done.”
Sam: “Yeah I’m done if you’re done.”

Dean: “Back there when Spencer had us, he screwed with my head. I saw mom…when she died and some other cr**.”
Sam: “Yeah me too.”
Dean: “You know when I look back at what our family’s been through, what everybody’s been through and seeing all that pain, I realize that the only way we’ve made it through it all was by hanging together. I trust you Sammy. With this deal, locking those SOB’s up in the furnace once and for all, it’s too important not to. So if you say you’re good, then that’s it. I’m with you a 100%.”

Dean: “How did James find you anyway?”
Portia: “Not the way it works. The familiar finds the master and they become inseparable.”
Dean: “I guess a lot of people feel that way about their pets. What?”
Portia: “I’m not James’ pet.”
Dean: “Well not all the time.”
Portia: “Not ever. The master and the familiar, there’s an unbreakable bond like a melding of souls. We would die for each other.”

Portia: “Tonight James and I were close. Without psychological walls. Intimate:
Dean: “I…I don’t…”
Sam: “They had sex.”
Dean: “Wow. I uh…I didn’t expect that.”
Portia: “We have an unusual relationship. Familiars aren’t supposed to be sexually involved with their witches.”
Dean: “Understandable you know considering that you’re uh…well and that he’s…That’s….heh, a little help here. No?”