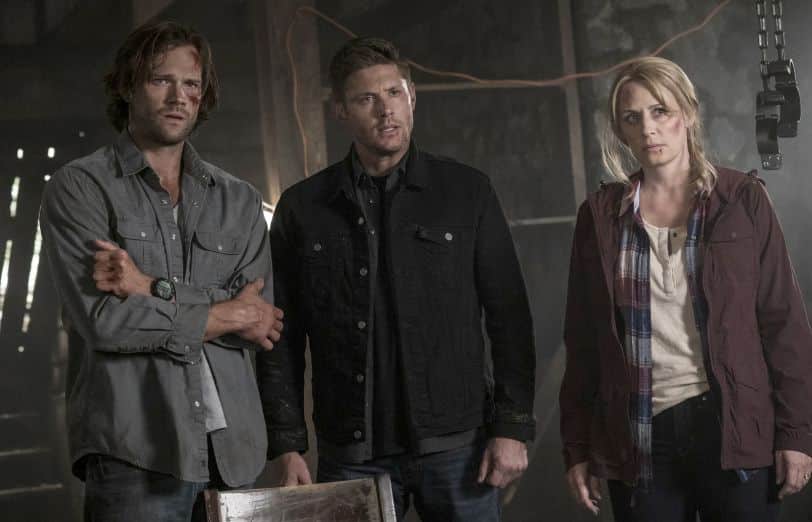 INTERIOR: SAM’S IN BED BREATHING HEAVILY. CAMERA PANS TO TONI NEXT TO HIM, CANDLES LIT IN THE BACKGROUND.
SAM: Wow.
TONI: Isn’t this much more pleasant, Sam?
SAM (STILL BREATHING HEAVILY): I got to say, I did not see that happening.
TONI (CHUCKLES): Well, you know what they say. Opposites attract.
SAM MOVES OVER TONI
TONI: Oh, we’ll get there, Sam. Just another couple of questions.
SAM MOVES HIS HEAD WHILE LOOKING DOWN AT TONI
SAM: Hmm.
TITLE CARD
ACT 1

INTERIOR: SAM AND TONI ARE IN BED RELAXING AND HOLDING GLASSES OF WINE.
TON: Fascinating. But surely you exaggerate. American Hunters can’t be as bad as you say.
SAM: Yeah. Uh, yeah, they can. What, they’re not in the U.K.?
TOMI: No. No, they work for us. Tools. They kill. They don’t think.
SAM: Huh.
TONI: Who recruited you and your brother? To whom do you report?
SAM SCOFFS AND SIGHS THEN TAKES THE GLASSES AWAY TO PLACE THEM ON THE NIGHTSTAND.
SAM: We, uh… We’re not just gonna talk all night, right? AS SAM OVES OVER PULLING THE SHEET UP, DEAN’S VOICE IS HEARD.
INTERIOR: THE BUNKER. DEAN’S SITTING DOWN TALKING ON HIS PHONE.

DEAN: I haven’t found anything on these surveillance cameras. I mean, it’s like they just disappeared. How about you? Any of the local beat cops see anybody that shouldn’t be there?
EXTERIUOR: NIGHT, CASTIEL IS OUTSIDE ALDRICH, MISSOURI STANDING LEANING AGAINST THE TRUCK.
CASTIEL: It’s pretty rural. Not a lot of beat cops. I’ve checked all the motels, abandoned buildings. No sign of Sam.
THE SCENE SWITCHES BACK AND FORTH BETWEEN DEAN AND CASTIEL DURING THE CONVERSATION.
DEAN: All right. I don’t know. You know, check… real-estate offices. See if anybody bought a place or rented a place. I mean, these people had a freakin’ plane. Maybe they do things legit.
CASTIEL: Okay, I understand. I’ll call you in the morning.
WHILE TALKING, DEAN RISES AND STARTS PACING.
DEAN: Cass, hey. So, here’s the thing. It’s been kind of weird here with, you know, Mom being back. It’s like we don’t know how to act around each other, so we just kind of make this small talk and act normal, but it’s — it’s so not normal.
CASTIEL: Um, I’m — I’m not sure. What — what has she said to you?
DEAN: Well, nothing. That — that — that’s the whole point.
CASTIEL: Okay, what have you said to her?
DEAN: Well, nothing. I’m — I don’t know what to say to her, you know? It — it’s — it’s like it’s all just too much, and…I don’t want to overwhelm her.
CASTIEL: Don’t make things needlessly complicated, as you humans tend to do. I’ll call you.
CASTIEL HANGS UP.
DEAN: Yeah. Great. That’s helpful. Thanks.
WEARING ONE OF THE ROBES, MARY WALKS IN.
MARY: Any news on Sam?
DEAN: Um, so somewhere outsi– here. Somewhere outside of Aldrich, Missouri. Cass is going through it with a fine-toothed comb, and I’ve cracked every database I could.
DEAN SITS DOWN IN FRONT OF HIS LAPTAP TO SHOW MARY WHAT HE’S DOING.
MARY: Every what?
DEAN: Right. No Internet your first time around.
MARY: Our house didn’t have an electric typewriter. So…are you really afraid of overwhelming me?
DEAN LOOKS AT MARY AND SHAKES HIS HEAD SLOWLY.
DEAN: Mom, look, I am… thrilled that you’re back. I mean, I’m so damn happy, I-I-I can’t even stand it.
MARY: I just… it’s just gonna take me a second to catch up, you know?
DEAN: Yeah, no, no. Look, take — take all the time you need, all right? It’s — it is what it is.
MARY: And when we do find Sam… how am I gonna face him?
DEAN: What do you mean?
MARY: That yellow-eyed thing would never have come for him that night if I… I started all of this.
INTERIOR: SAM IS LAYING ON HIS STOMACH WITH TONI BEHIND HIM STROKING HIS BACK.
TONI: It’s just surprising that for all your efforts, yours and all the Hunters, monsters remain rampant in this country.
SAM: Yeah, we just, uh — just keep plugging away, I guess.
TONI: Do you ever think — and don’t take this the wrong way — that some of your soldiers may have been compromised? Or bought.
SAM TURNS ON HIS SIDE WITH A CONTEMPLATIVE LOOK ON HIS FACE.
SAM: I mean… No, I-I don’t, um…
TONI: Is everything all right?
SAM SEES THE DOOR OPEN IN THE CELLAR AND THEN TONI’S FACE CLOSE TO HIS.
TONI’S VOICE ECHOING: Is everything all right?
SAM SEES THE WATER COMING DOWN FROM THE HOSE AND HIS ATTEMPT TO ESCAPE THE CELLAR.
SAM: No!
SAM SEES THE BLOWTORCH, HE’S LOOKING TOWARD THE STAIRS AT A TONI.
TONI: Is everything all right?
SAM SEES MORE OF WHAT HAPPENED IN THE CELLAR.
TONI’S VOICE ECHOCHING: Is everything all right?
THE BLOWTORCH HITS SAM’S FOOT AND HE SCREAMS.
SAM: No! I shouldn’t — I shouldn’t be talking to you. THE SCENE SWITCHES BETWEEN THE CELLAR AND THE BEDROOM AND END IN THE CELLAR WHEN SAM RAISES HIS HEAD. SAM IS CHAINED AND IN THE CHAIR. TONI IS SITTING IN HER USUAL SPOT.
TONI: You’ll have to admit, it was fun while it lasted.
SAM: What did you do to me?
TONI: An hallucination created by potion and powerful spell work. So…was it good for you? Hm. Sadly, I can’t do the spell again. Your brain would liquefy, which we don’t want. Yet. So… I’ll have to resort to less… pleasant methods.
TONI PICKS UP A KNIFE AND PLIERS.
TONI: Enhanced interrogation was never part of my job description.
TONI SCRAPES THE KNIFE ALONG SAM’S NECK.
TONI: But as it turns out… …I’m a quick study.
TONI PLUNGES THE KNIFE INTO SAM.
ACT 2

INTERIOR: VINCES HOTEL ROOM. VINCE LOOKS AROUND THE CORNER INTO THE BATHROOM. THE WATER IS STILL RUNNING BUT IT’S JUST HOT WATER. VINCE CHECKES HIS FACE TO FIND NO BLOOD. THE ELECTRICITY CRACKLES AND LIGHTS BEGIN TO FLICKER. VINCE MOVES TOWARDS THE LIVING ROOM AND TURNS THE LIGHTS ON AND OFF. THEY’VE STOPPED FLICKERING. THUNDER CRASHES IN LOUDLY. THE TV TURNS ON BUT JUST SHOWS STATIC.
FEMALE VOICE: Vince. Vince.
VINCE PICKS UP THE PHONE AND BEGINS DIALING.
VINCE: Hello, front desk? Hello?
THE PHONE IS DEAD AND VINCE THROWS IT AT THE WALL.
FEMALE VOICE: Vince. Vince.
THERE ARE VOICES IN THE ROOM. THUNDER CONTINUES AS THE PICTURES OF JEN BEGIN TO FLY AROUND AND THEN HURTLE TOWARDS VINCE WHO DODGES THEM. HE STEPS BACK INTO THE NEXT ROOM AND LOCKS THE DOOR.
FEMALE VOICE: Vince. Vince.
VINCE TURNS AROUND TO SEE A WOMAN STANDING THERE.
VINCE: No. Jen.
JEN: Yes, Vince.
VINCE: How? Why?
JEN WALKS FORWARD AND STANDS IN FRONT OF VINCE.
JEN: I needed to say I’m sorry. Swallowing those pills was selfish.
VINCE: I’ve had to live all these years knowing how I treated you.
JEN: At the time, leaving you seemed fair since you left me so many times.
VINCE: All I want is you.
JEN: That can happen, Vince.
VINCE: What can happen?
JEN: You and me together.
VINCE: Are you a ghost?
JEN: No. I’m an angel.
VINCE: Those are real?
JEN: Real and very powerful, Vince. I can take away your pain. Bring you peace. You only have to do one easy thing.
VINCE: What?
JEN: Will you invite me in?
VINCE: Yes.
JEN’S EYES GLOW RED AS SHE KISSES VINCE. THE SCENE DISOVES IN VERY BRIGHT LIGHT.
INTERIOR: SCENE CHANGES TO ROWENA IN A ROOM LIGHT BY CANDLES. SHE’S STANDING IN FRONT OF A TABLE WITH HER HANDS HOVERING ON THE SIDES OF A CRYSTAL BALL.
ROWENA: Ostende illum mihi quen quaero.
CROWLEY WALKS TOWARDS HER.
CROWLEY: What’s the bloody hold-up? He’s the one and only Satan in the phonebook.
ROWENA: It’s witchcraft, not Google Maps. And normally I’d have a piece of hair or a belonging to lock on to. You don’t even know what he looks like!
CROWLEY: He has an aura. Supreme evil. Lo on to that. Do I have to do everything?
ROWENA: I can’t believe I’m once again down some dank hole seeking the devil! When does it end? It’s exactly why I’m retiring to Boca Raton. With Ben.
CROWLEY: Ben? Who makes oatmeal look fascinating.
ROWENA: He’s successful, stable, and I’ll outlive him.
A CRACKLING STARTS INSIDE THE CRYSTAL BALL.
CROWLEY: Lucifer?
ROWENA: I think so. Yes. I’ll give you the location.
CROWLEY: No, no, no. Not now. I just want to know who we’re dealing with before we attack.
ROWENA: By “we,” I presume you mean the Winchesters and their pet angel?
CROWLEY: I don’t need them. Just you.
ROWENA SIGHS.
CROWLEY: Look, it’s obvious. We got to put Lucifer back in the cage. You’re the only one that can do it.
ROWENA GRABS THE CRYSTAL BALL AND SIGHS.
ROWENA: Should’ve known. No, Fergus! I’ll not be involved in that nonsense again!
CROWLEY: Maybe I should tell Ben about you. Maybe just kill him. Either way, it’s bye-bye, Boca.
ROWENA: You are a hateful snake. In any case, Lucifer can’t be sent back to the cage while he’s in a vessel.
CROWLEY: He won’t be. Not by the time we’re ready.
INTERIOR: IN THE CELLAR SAM HAS BEEN BLOODIED BY TONI’S KNIFE. THE CAMERA PULLS BACK TO SHOW HIM ALONE IN THE CELLAR.
EXTERIOR: DAY, OUTSIDE THE FARMHOUSE. THE IMPALA PULLS UP. CASTIEL IS LEANING AGAINST THE TRUCK. DEAN AND MARY EXIT THE IMPALA AND WALK UP TO CASTIEL.
DEAN: Where’s all this warding you mentioned?
CASTIEL: It’s cloaked. It’s very powerful. You brought your mother?
MARY: Hello, Castiel. Yes, he did.
DEAN: You sure there’s anyone inside?
CASTIEL: No. The agent said the lease was handled long distance, but someone warded the house.
DEAN: I’m gonna go have a closer look.
MARY STARTS TO FOLLOW DEAN.
DEAN: Mom, I got this.
MARY: You can keep me from driving, Dean. Not from hunting.
DEAN SHAKES HIS HEAD IN ACKNOWLEDGEMENT THEN LOOKS TO CASTIEL FOR HELP.
CASTIEL: I’m locked out by the warding. I could use the company.
DEAN: Thanks.
DEAN LOOKS AT CASTIEL GRATEFULLY AND WALKS AWAY.
INTERIOR: HALLWAY OF VINCE’S HOTEL. TOMMY KNOCKS ON THE DOOR.
TOMMY: Dude, it’s noon. Let me in. Whoa. Look at you.
VINCE OPENS THE DOOR AND LETS TOMMY IN.
TOMMY: Pretty dressed up for rehearsal, don’t you think?
LUCIFER: Rehearsal.
TOMMY: Brother, are you okay?
LUCIFER: Yeah, I just can’t make it to rehearsal.
TOMMY: Yeah, you got better plans?
LUCIFER: I do.
TOMMY: Vince, I’m serious.
VINCE: So am I.
TOMMY: All right. Look, stop screwing around.
VINCE TURNS TO LOOK AT TOMMY AS HIS EYES GLOW RED. HE PUSHES TOMMY IN THE CHEST. TOMMY GOES FLYING THROUGH THE DOOR AND INTO THE HALLWAY WHERE HE LANDS AND DOESN’T MOVE.
VINCE: I said I had plans.
EXTERIOR: THE FARMHOUSE. DEAN IS WALKING OUTSIDE AND HEARS A THUD IN THE DISTANCE. HE GOES TO INVESTIGATE AND ENDS UP OUTSIDE THE CELLAR. HE TRIES TO OPEN IT, LOOKS UP, AND STEPS ONTO A SYMBOL THAT BEGINS TO GLOW.
DEAN: Son of a bitch.
THERE’S A WHOOSHING SOUND AND A VERY BRIGHT LIGHT.
ACT 4